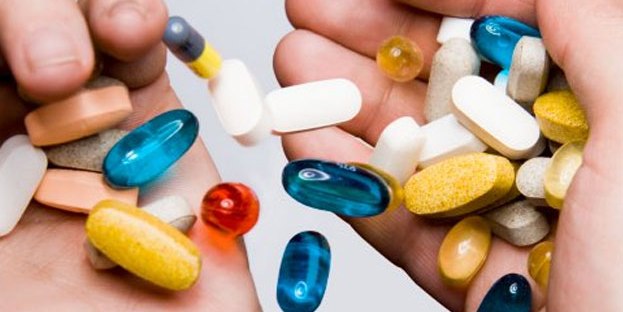 Someone we love dearly recently underwent cardiac angiography which revealed a significant blockage to a major coronary artery. The cardiologist explained to him that the blockage was due to calcium deposits which likely happened due to the fact that he was taking OTC calcium supplementation. This prompted me to do a literature search on the effects of calcium on heart health and I came across a study from 2013 which indeed showed that intake of supplemental calcium was related to mortality  due to cardiovascular disease in men while intake of calcium through diet was not. I was surprised by the findings of this study, to say the least. Not long after, I found myself researching the effects of various dietary supplements on our health and I found some information that will be of interest to a lot of us, because, as per data collected by Council for Responsible Nutrition, 68% of adults in USA take dietary supplements.

The United States Food and Drug Administration (FDA), defines a dietary supplement as a vitamin; mineral; herb or other botanical; amino acid; dietary substance for use by man to supplement the diet by increasing the total dietary intake; or a concentrate, metabolite, constituent, extract, or combination of the preceding substances. Some are beneficial and worth consuming. Others, not so much.

If you have a specific vitamin/mineral deficiency as diagnosed by your physician, you need to supply your body that vitamin/mineral. Depending on the severity of the deficiency, increase in dietary sources may not be enough and a supplement may be necessary.

Women in the reproductive age group should take folic acid supplementation to decrease the risk of neural tube defects in babies.

Vitamin B12 is recommended for vegetarians or vegan, who may experience deficiencies, as a result of not eating fish, meat, or dairy products.

Antioxidants have long been thought to prevent  cancer, cardiovascular disease, aging and promote the immune system. Whereas diets rich in antioxidants are associated with lower risks, supplementation with antioxidants does not have sufficient evidence of benefit.

Many food products like dairy and cereals, are fortified with vitamin A. The National Health and Nutrition Examination Survey (NHANES) shows that the average American consumes about 3300 IU of Vitamin A per day, the recommended daily intake being between 2000-3000 IU per day.  A 2012 Cochrane review article found that treatment with vitamins A and E was associated with an increase in mortality.

Vitamin C is also a big favorite for the prevention of cancer, cardiovascular disease, and the common cold. Although vitamin C supplementation, being a water-soluble vitamin, has low potential for toxicity, however, mega doses of vitamin C can significantly increase iron absorption and can induce effects related to that.

Combining of supplements and other medications can produce adverse effects, some of which could be life-threatening.  For example Coumadin (a prescription anticoagulant), ginkgo biloba, aspirin and vitamin E can each thin the blood and in combination, they can increase the potential for internal bleeding. St. John’s Wort may significantly reduce the effectiveness of some medications used to treat  depression, seizures, HIV and of oral contraceptives.

Remember the Council for Responsible Nutrition from the opening paragraph? Turns out, just because the word “responsible” appears in its name, it is not a trustworthy agency.

In February 2015, New York Attorney General Eric Schneiderman announced that tests run by order of his office determined that nearly four in every five herbal supplements tested at major retailers in New York didn’t contain the ingredients stated on the label. More than a third of them contained “contaminants” such as rice, pine, beans, and asparagus. Schneiderman ordered those retailers to stop selling some store-brand supplements, including ginseng, St. John’s Wort, Echinacea and garlic.

The Council for Responsible Nutrition disputed the results of these tests. They are a leading trade association representing dietary supplement and functional food manufacturers and ingredient suppliers- a lobbying group for said manufacturers.

In 1994, the US Congress approved the Dietary Supplement Health and Education Act. Under this law, manufacturers of dietary supplements are responsible for making sure their products are safe before they go to market. They are also responsible for determining that the claims on their labels are accurate and truthful. Dietary supplement products are NOT reviewed by the government before they are marketed, but FDA has the responsibility to take action against any unsafe dietary supplement product AFTER it reaches the market and potentially your body.

Pills cannot replace real food. Dietary supplements are intended to supplement the diets of some people, but not to replace a healthy, balance, varied diet. While you need enough nutrients, too much of a good thing is not necessarily better. When in doubt, ask your doctor.