India has long been called the “Spice Bowl of the World”. Did you know India, also gave us the technology to extract sugar from sugarcane?  As early as 350CE, during the Gupta dynasty, Indians learnt how to crystallize sugar. From India, it spread to China, Persia and the Middle East. Sugar was brought to Europe by the Crusaders.  When Christopher Columbus sailed to the Western hemisphere, he stopped in the Dominican Republic, where sugar cane grew in abundance. He carried cuttings with him on his voyage to America (which he ironically thought was India)

Today, sugar is ubiquitous. And, it’s not just the sugar you add to your morning cup of coffee.

So, how does sugar affect our body? Let us analyze

Upon digestion, sugar is broken down to glucose which is rapidly absorbed into the bloodstream. This leads to a quick increase in blood glucose and provides energy for the body. However, the fast delivery leads to a fast fall as the glucose is rapidly taken up by cells of the body- the “sugar rush” followed by the “sugar crash”

No one has trouble believing that consuming excess amount of sugar leads to increase in weight and, independently, decreasing sugar intake decreases the incidence of obesity. It is also well understood that “fast acting” sugars (refined sugar, honey, maple syrup, high fructose corn syrup etc) cause this effect much more than “high fiber” sugars like whole grains

No direct link between sugar and risk of diabetes has been found in studies. However, the extra calories from consuming large amounts of sugar can lead to obesity, as we just determined, which may itself increase the risk of developing this metabolic disease. Other studies show correlation between refined sugar consumption and the onset of diabetes not only through obesity but also by increasing dietary glycemic load, leading to insulin resistance, pancreatic β-cell dysfunction, and inflammation.

The myth that sugar leads to hyperactivity has been busted by scientific studies.One study followed thirty-five boys aged 5 to 7-years, whose mothers believed they became hyperactive.  They were randomly assigned to experimental and control groups. In the experimental group, mothers were told that their kids were given sugar, and, in the control group, mothers were told that placebo was given. In reality, all children received the placebo, but mothers in the sugar expectancy condition rated their children as significantly more hyperactive. This result suggests that the effect of sugar is probably related to the preconceived notions among parents.

It has become common knowledge that eating fat is bad for the heart. Is that true, though?Switching from saturated fats to carbohydrates with high glycemic index values shows higher risk of myocardial infarction.   Another study has shown that the risk of developing coronary heart disease is decreased by consuming a diet high in polyunsaturated fatty acids but low in sugar, whereas a low-fat, high-carb diet brings no reduction. Unfortunately, “low-fat” tends to mean “high sugar”

Look at the nutrition label for low-fat yogurt:

Note that the amount of sugar (for which, curiously, no %daily value is shown) is 26 g

How much sugar should you be consuming?

This means, if you are a woman like me, one cup of “low-fat” yogurt is more than the amount of dessert you can have for the day!

The evidence shows that sugars are, without argument, the most important dietary factor in the development of dental caries. Refined sugars increase the risk of dental caries. Caries is caused demineralisation of enamel and dentine (the hard tissues of the teeth) by organic acids formed by bacteria in metabolism of sugars.

Look at the nutrition label of granulated sugar: 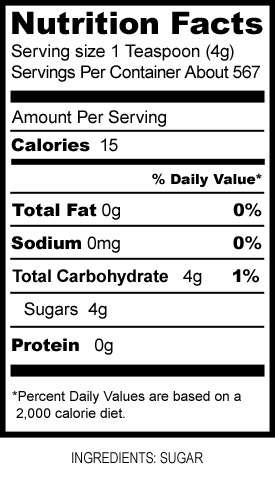 Ok, so we did not find many virtues in sugar. So how are we to satisfy our sweet tooth? How about sugar substitutes or artificial sweeteners?

I promise to hit that sweet spot in another post.